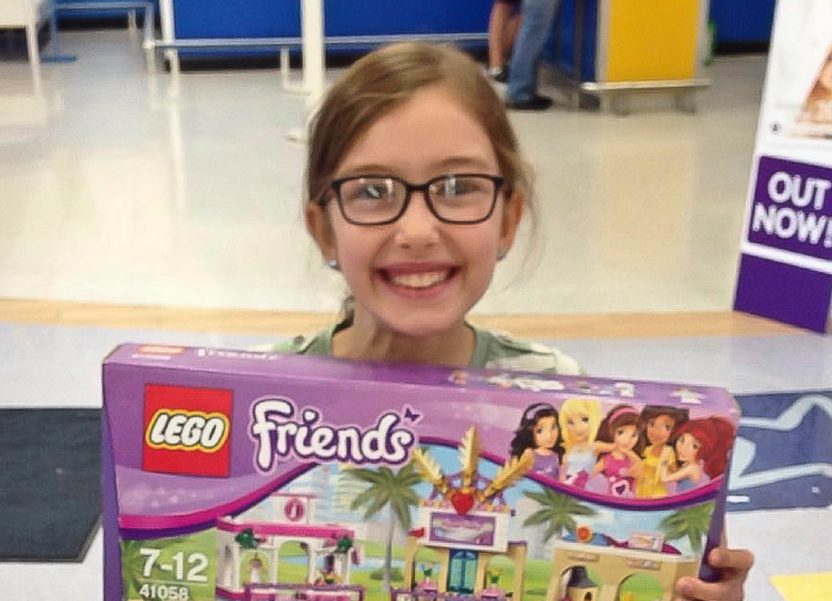 Emily, the Lego Friends Mall & the Toys R Us Knight.

Once upon a Time…

This is the tale of the fair maiden, Emily, and the heroic Knight from the Kingdom of Toys R Us.

Once upon a time there was a maiden called Emily. She was bright, bubbly and dearly loved by her mummy, daddy and sister, despite some of her odd habits and inability to brush her teeth unprompted after nine years of training.

Emily was one of a kind. She didn’t conform to the usual ‘fair maiden’ job specification. She hated pink and declared she would only wear dresses for very special occasions (like when hell freezes over). Instead, she was a ‘Tom Boy’, her usual attire consisting of a Star Wars baseball cap, jeans and a pair of trusty old converse high tops.

By SaimaTristanb at en.wikipedia [CC BY-SA 2.0 https://creativecommons.org/licenses/by-sa/2.0)%5D, from Wikimedia CommonsEmily loved all the creatures of the forest and believed that her mummy and daddy should house every dog, cat and turtle in the land. In return, she promised to feed them, clean them, love them and groom them. However, after a very bad guinea pig experience, her mummy refused to take in any more animals. Emily didn’t give up, trying to persuade her mummy with pleas and promises. However, her mummy stood firm, realising that, as with the guinea pigs, she would end up being the sole carer for any animals she took in, on top of all of her other motherly duties and chores.

In the end, Emily satisfied herself with easy-to-keep pets from the land of Sylvania.  These hedgehogs, rabbits, badgers and squirrels were magic, needing no feeding, cleaning or grooming.  Unfortunately, once the Sylvanians found a place to settle, they got comfortable and didn’t want the upheaval of moving elsewhere. It didn’t take long before scores of Sylvanians were living on the large plot of land owned by Emily’s parents (the lounge).  As time went on, the settlement spread across the lounge, becoming a thriving community of farms, cottages and houses.

One day, Emily’s mummy and daddy made plans for a new extension, with the land in the lounge becoming a place for ‘grown ups’. In anticipation of the change of use, the Sylvanian eviction programme began in earnest.  It was a long and painful process involving lengthy negotiations and the promise of compensation. After the last of the Sylvanians moved out, peace settled on the land and Emily’s mummy and daddy enjoyed a period of calm, with wonderful spacious views across the lounge as far as the eye could see.

The Quest for a Lego Friends Mall.

Time passed, until one day, whilst browsing on her tablet of dreams, Emily spied a wonderful Lego Friends Mall in the land of Gumtree, for the bargain price of £30. This was much less than the price in the other shops in the City of Nottingham.  She swept the dust off her money box and looked inside, realising she didn’t have enough to buy the Mall outright. Knowing from a young age that ‘Money does not groweth on trees’, Emily declared to her mummy she would use her own money and would earn the rest by helping with chores and making her mummy and daddy’s life easier.

Determined to get her Lego Mall from the land of Gumtree, she set about the task of raising funds with enthusiasm. Her parents were amazed by her focus and dedication.

In the days ahead, Emily earned extra pocket money by:

The Lego Quest hits a snag.

Finally, by the middle of the week, and after an exhausting day weeding, Emily’s mission was accomplished. She had all the money she needed to buy her Lego Friends Mall. As soon as she returned home from the land of Ashover, she rushed up the stairs to retrieve the tablet of dreams, eagerly searching for her prize.

Alas, the Lego Friends Mall had been sold to another maiden.

She’d worked so hard to save up enough funds, only to find the Mall was gone.  Her mummy felt like crying too, having watched how hard she had worked all week and how determined she’d been.

Emily was very sad. Her Mummy tried to comfort her, offering to send out a message to the land of Facebook to see if any of its inhabitants knew of any other Lego Mall’s ‘going cheap’.

Just as Emily began to lose hope, a message come back from the land of Facebook: a Mall had been found in the kingdom of Toys R Us, in the land of Derby. What’s more, it was at a specially reduced price. Plus, if she used the magic ‘Click and Collect’ spell, no other maidens would be able to get their hands on it before she did.

The Kingdom of Toys R Us.

Emily’s parents were surprised by the news that her precious Mall had been found in the Kingdom of Toys R Us. Over the years they had grown to believe nothing good ever came from a visit to that place. In fact, they tended to avoid it liketh the plague. They much preferred the hallowed halls of John Lewis or, at a push, the mythical land of Ar-Gos.

Early the next day, ie. at a time of day when only the tree nymphs and tooth fairies were awake, Emily’s daddy prepared the carriage and they set off on ‘Brian Clough Way’ to the land of Derby.

When they finally reached their destination, Emily clutched her purse of golden coins in eager anticipation as the shutters rolled up at the Kingdom of Toys R Us.

Incredibly, and without waiting around for hours, they found a shopkeeper, Sir Kyle of Us. Unlike some of the other shopkeepers in that kingdom, he was happy to help Emily in her quest. He tapped the ‘Click and Collect’ Magic code into his tablet to unlock the Lego Friends Mall and set off on his quest to find it in the storeroom. Unfortunately, dark forces had been at work in the land of Derby and all four of the Lego Friends Malls on the inventory had been stolen by Trolls.

Emily was in despair. Once more her plans had been thwarted and she’d been denied the prize she’d worked so hard for. However, Sir Kyle of Us was not to be beaten and sensing the fair maiden’s distress, he spent the next half an hour sending messages to all the other Toys R Us Kingdoms. Even in the nearby town of Burton-on-Trent, the Trolls had been at work, taking Lego Friends Malls from the shelves by stealth. Sir Kyle used all of his powers to summon the good people of UPS to deliver a Mall from a far off land but fair Emily would have to wait days.

Sir Kyle took down Emily’s contact details and directed them to the nearest tavern so they could fill their grumbling bellies.

Whilst Emily and her daddy were in the McDonald’s tavern, a miracle happened. Sir Kyle of Us, who had continued in his quest to find a Mall for the fair maiden Emily, sent word that he had found one for her in the fair city of Sheffield, a land beyond the realm of the Trolls.  The Knights of Toys R Us Sheffield promised to guard the Mall until Emily could reach their kingdom.  What’s more, Sir Kyle had authorised a further £10 discount because of the inconvenience caused. This came as a relief to Emily’s daddy as it would help towards fuel for his carriage on the additional 2-hour round trip.

After a long and tortuous journey, Emily and her daddy finally arrived at the Hall known as the ‘Meadow Hall’, home of the twinkling Kingdom of Toys R Us Sheffield. There, kept safe by half a dozen Knights in blue, was her prize…’The Lego Friends Mall of Dreams’.

Thanks to Sir Kyle of Us, Emily’s quest was finally over. She was delighted, her wide smile bringing joy to all who witnessed it.

The Fair Maiden Emily is absolutely delighted to complete her Quest and find the Holy Grail in Toys R Us with the help of Sir Kyle, The elusive Lego Friends Mall

Sir Kyle of Us, your endeavors will not be forgotten. You have changed Emily’s Mummy and Daddy’s opinion of the Kingdom of Toys R Us. From now on, Emily’s mummy will think of it with a smile instead if being filled with the desire to pull her own fingernails off one by one rather than shop there.

You were a faithful and true knight, going above and beyond the call of duty for the fair Maiden Emily. Your valiant endeavors have been documented on tablets in the principality of ‘Store Survey and Customer Satisfaction’ so that the entire kingdom of Toys R Us will learn of your gallantry. What’s more, Emily’s mummy will share the story of your heroism with the entire world (or her 200+ readers).

They all lived happily ever after…Or at least until Emily’s mummy realised that although the ‘Lounge Of grown-ups’ had waved goodbye to the good folk of Sylvania, it had unwittingly opened the door to some new inhabitants…

Have you got tales of people who have gone above and beyond the call of duty. Who are the heroes and Knights in shining armour in your life. Why not thank them here or thank them in person for making a difference. 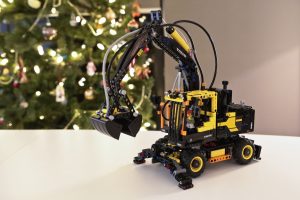 We continue our Christmas Lego building tradition by building the Lego Volvo EW160E 2-in-1 (alternative Volvo L30G) Set No: 42053. I give you my review of our first Lego Technic set. 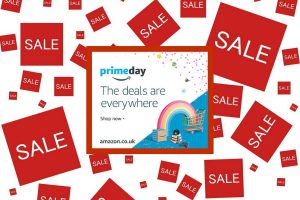 Prime Day is Amazon's annual deals event for Prime members.  This year, the 30-hour flash sale promises to bigger than ever, with an extra six hours to shop & deals across dozens of departments, including tech, beauty, games, fashion, home, sports, pets and more. For more information & a FREE 30 day Amazon Prime trial, read on. 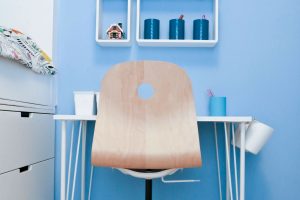 Back to School ideas: Top tips for creating the perfect ‘Homework Station’.

I share my tips on how to create a fun, organised and inspirational homework station that'll have your kids itching to get back to school.